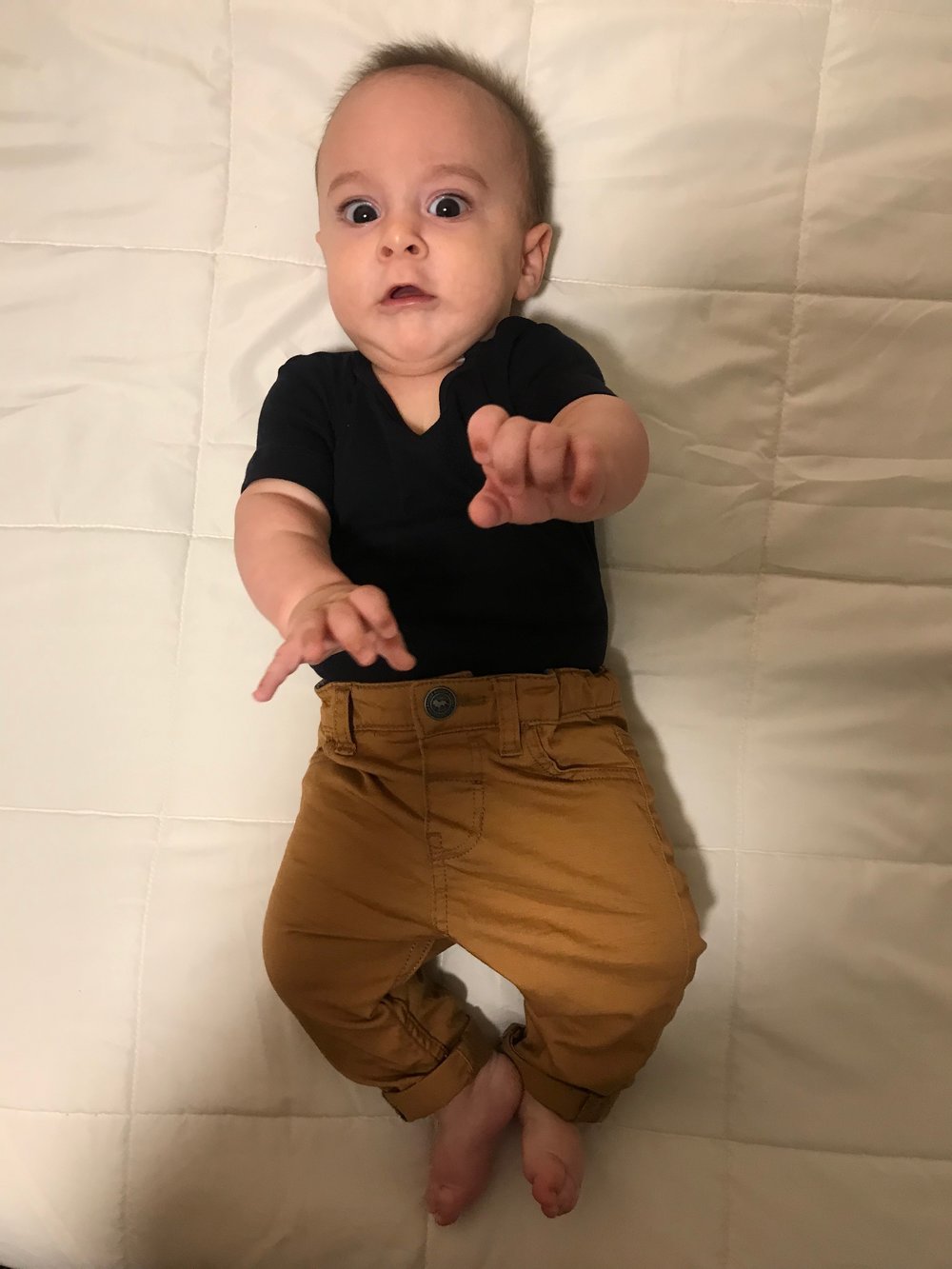 I’ve been getting a lot of questions lately about Luca’s “schedule.” I put schedule in quotation marks because he has no schedule and has really never had a schedule. maybe he has a rough schedule, but it’s day-by-day.

some people live by schedules. some people have multiple children or for whatever reason, schedules aren’t for them.

I am somewhere in between. I like the idea of a schedule because it gives ME more predictability in my day, BUT at the same time, it doesn’t leave room for spontaneity or for flexibility. schedules, to me, make me feel locked in place – like, the baby rules my schedule/life, and I can’t do anything unless it fits within the baby’s schedule. which sounds weird to me?

the best advice I ever got (from my sister-in-law Sandra) was, “the baby came into YOUR life, you didn’t come into the BABY’S life.” while I was pregnant, I loved hearing this, because you don’t want to think your life “ends” when the baby arrives. I thought, “great! we will fit the baby into OUR lives!” 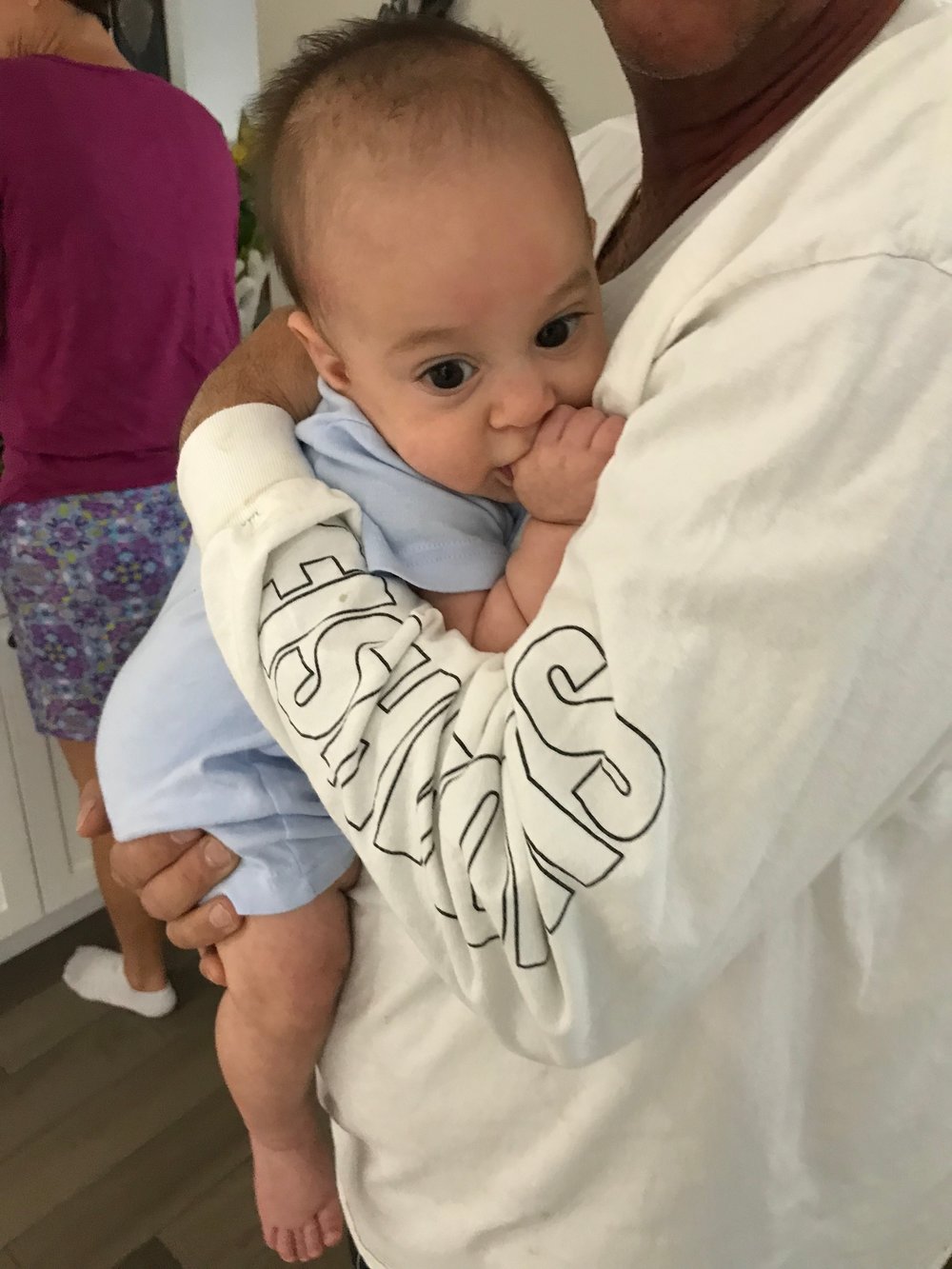 however, it’s easier said than done. if you know your baby is due for a nap around a certain time and you decide to go out with him and he doesn’t fall asleep, he becomes an overtired mess! baby’s don’t do well (from what I’ve learned) when they are overtired. they’re fussy, inconsolable sometimes, and it can be a struggle to get them down for a nap, even though they’re exhausted.

thus, it seems like a lose lose at times. if the baby sleeps on schedule, yes, he’s more predictable, but then you are living by the baby. lose. if the baby doesn’t sleep on a schedule and you do whatever whenever, he can be fussy and unpredictable. lose.

sigh. what I’ve found out is that a balance is key. some days, Luca will be home for all of his nap times – we’ll stay close to home, make sure to feed him exactly when he’s hungry, etc. then, some days, we’ll take him around with us with whatever we have to do and “deal” with the consequences. I think that the more I do the latter, the more Luca will get used to being out and about and will be able to nap on the go. now, he’s not too used to it, because I don’t really take him far when I’m home in Jersey City (I’m in Florida right now) and thus, he’s usually on somewhat of a schedule. 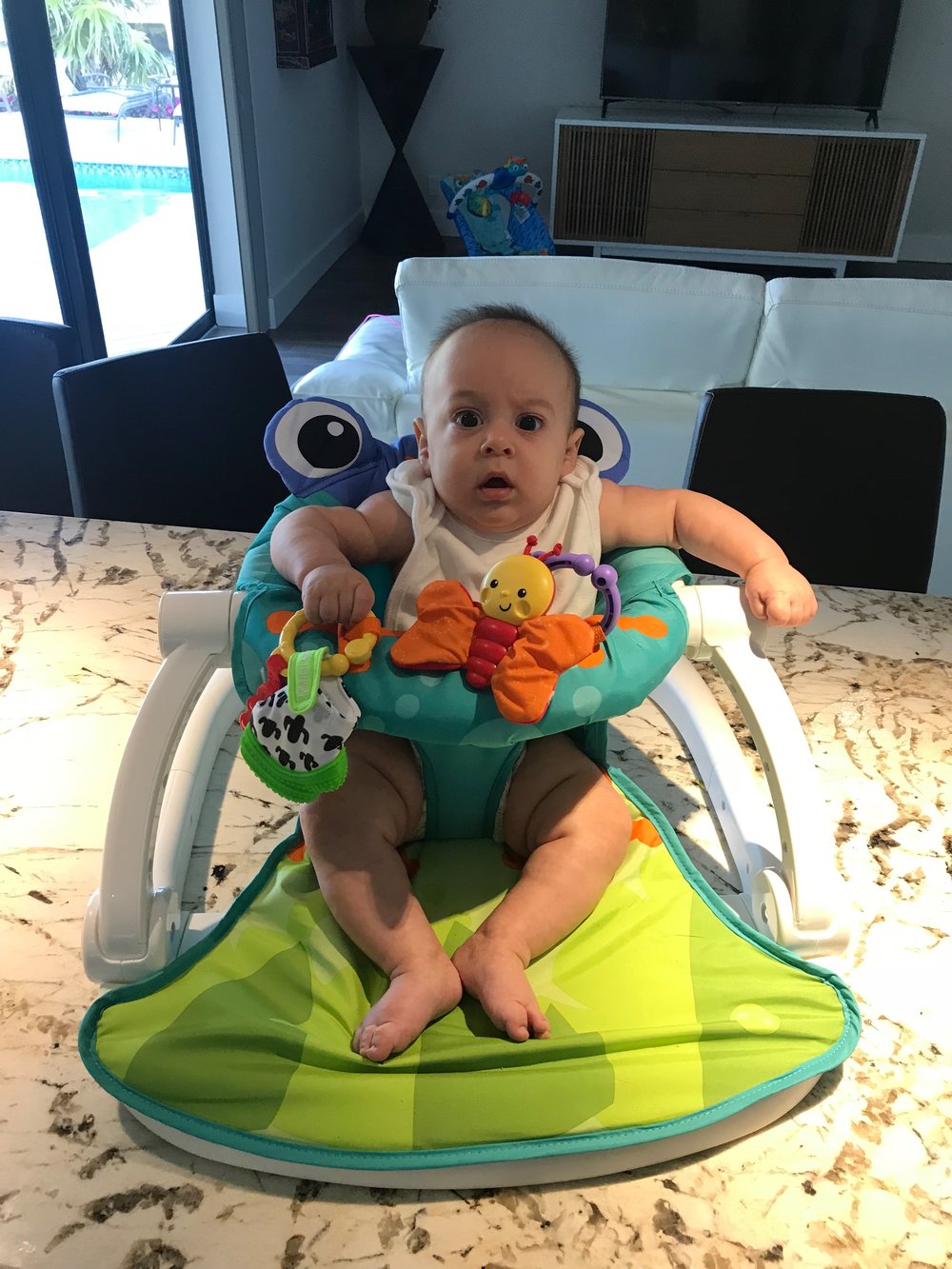 what’s great about the balance is that you get flexibility and predictability. that’s what seems to work best for Luca and our family right now. who knows as he gets older if that will change, but that’s what’s working for me right now. I can’t imagine living by a predetermined, finite schedule – sounds stressful!

Luca doesn’t really have a schedule. I feed him on demand (when he shows me hunger cues), but that usually ends up being every 3-4 hours. he’s rarely hungry before that and rarely (if ever) goes longer than 4 hours. so, if he wakes up and nurses at 7:30am, I’ll plan on being ready to feed him at 10:30am (he usually shows signs around 10:20/10:30 that he’s hungry anyway) and so on…

And in between his feedings, he’s usually up for 1.5-2 hours. once he turned 4 months, he started staying awake longer, almost 2 hours. 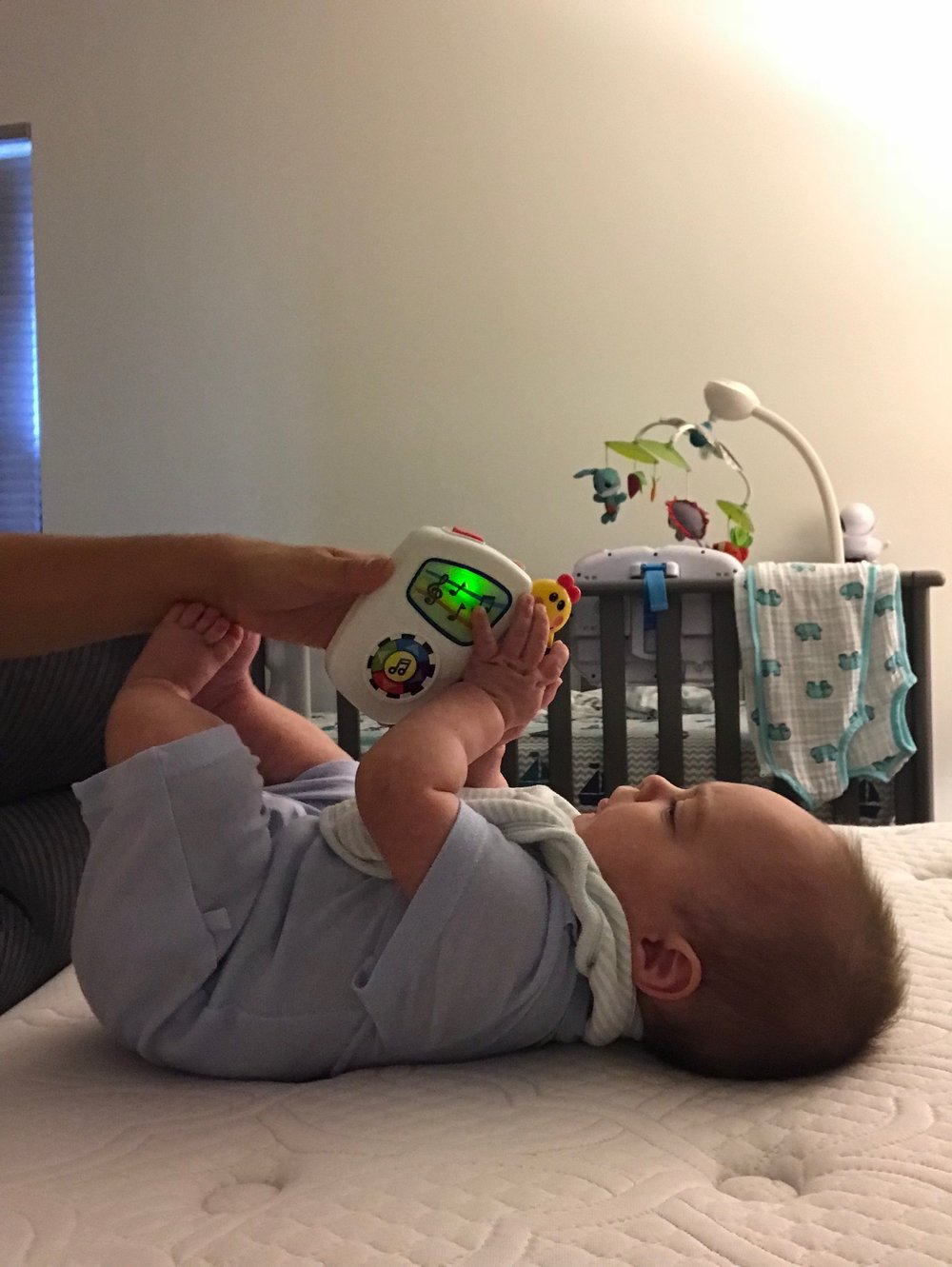 so, if he wakes up at 7am, feeds at 7:15am, he’s due to go down anywhere between 8:30 and 9am and then he’ll be hungry again around 10:15am. I just keep this in mind all day and constantly am shifting my timeframes, each day.

when Luca first wakes up, I play with him for about 15 minutes. then, I change his diaper and outfit (or keep him just in a diaper!), I nurse him, burp him, and then I play with him until he shows signs of being tired (his eyes get heavy, he’s not as interested in playing, or he gets fussy.) I’ll put him down and he usually naps anywhere from 45 minutes to 2 hours.

I change his diaper every 3 hours, which usually lands around the time I feed him, so I like to feed him with a clean diaper. I keep repeating all of this. 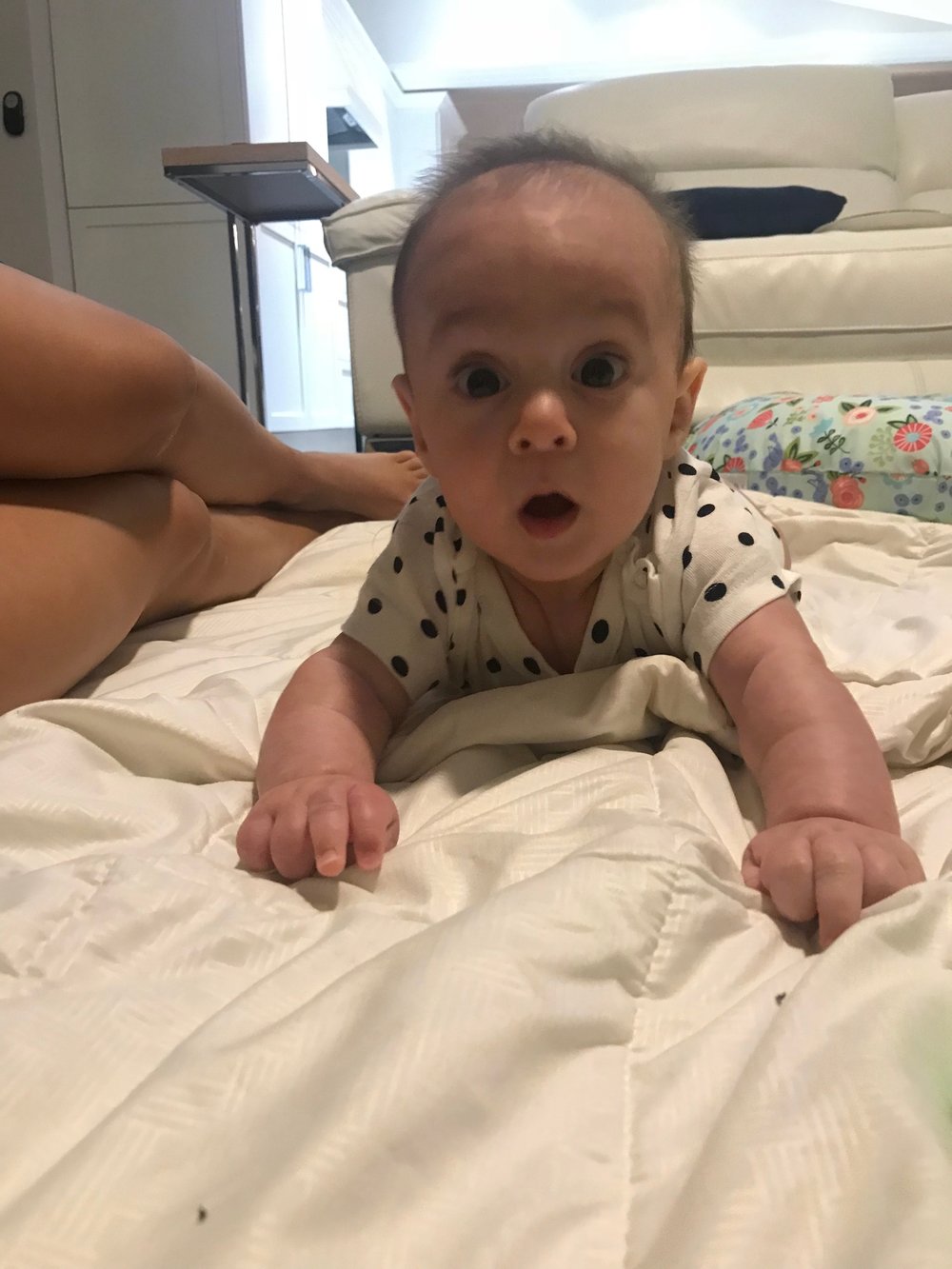 then, at night time, we have a “routine.”

usually, Luca goes down to sleep anywhere between 7pm and 8:30pm. it all depends on when his last feeding was and how long his naps prior were. again, we’re not a schedule, so it’s unpredictable. I’ll usually know by mid afternoon what time he’ll be going to bed, though.

about 30 minutes before he’s due to nurse again, we bathe him, I give him a body massage, put his diaper on, put a fresh pair of pajamas on (just a zip-up onesie because that’s what he’s most comfortable in), and then, I nurse him. half of the time, he falls asleep on my boob and I let him sleep for about 5 minutes, and then I burp him (he usually stays asleep) and once he burps, I rock him for another 5 minutes and then put him down. 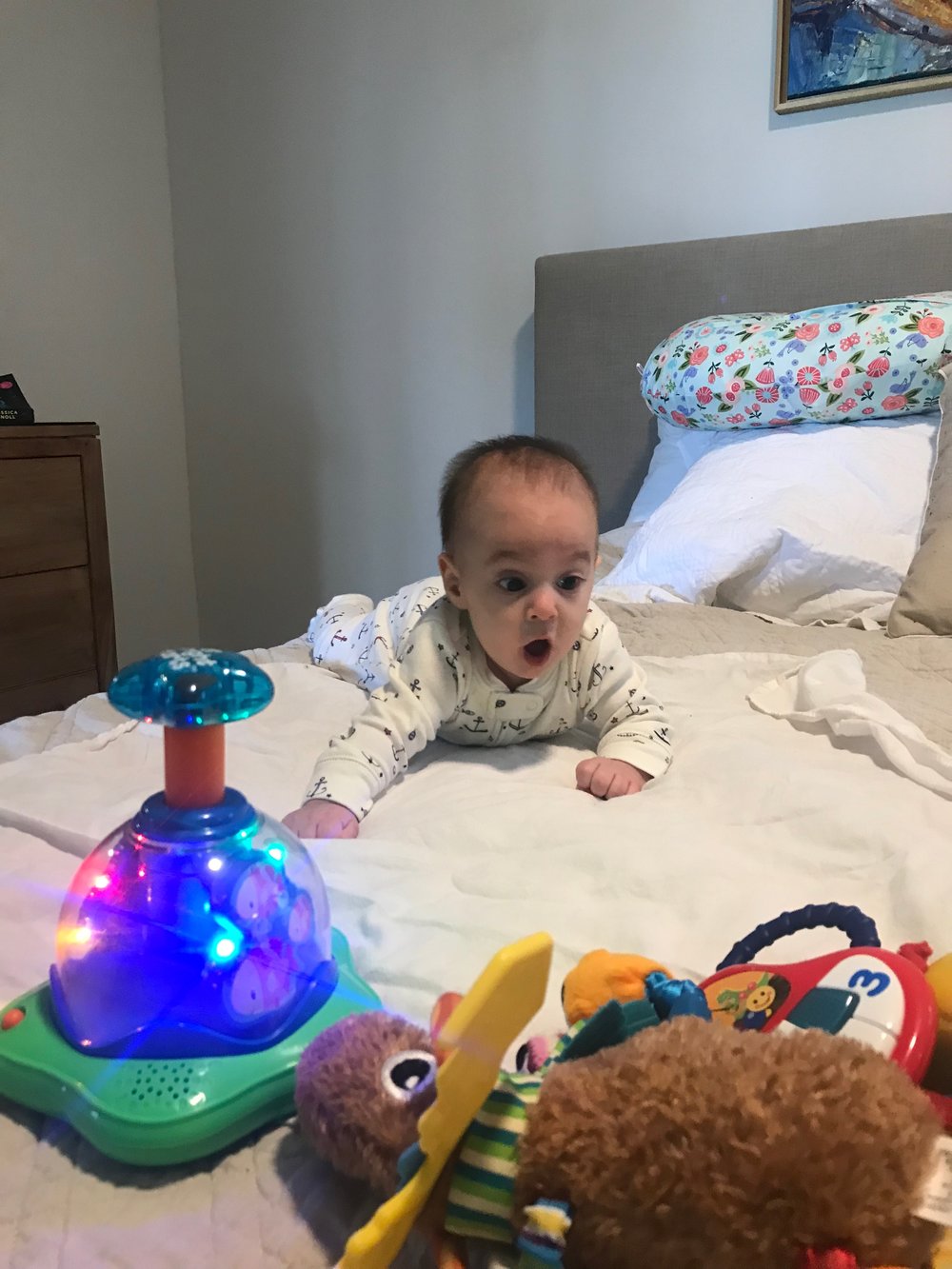 the other half of the time (when he’s still awake after nursing), I will keep him in the nursery and do my best to get him into bedtime mode. I’ll keep the lights dimmed, I’ll put him on his back in the crib and put on his soother or his mobile on a lullaby track. I’ll whisper to him, I’ll sign Twinkle, Twinkle Little Star or something soothing like that. once I see his eyes are getting heavy (or if he yawns!), I’ll flip him on his tummy, give him a pacifier (if he needs it) and rub his back and put on his white noise machine and baby shusher and he usually falls right asleep.

let me preface this by saying: I’M BLESSED. I’M LUCKY. and I’M GRATEFUL. around 8 weeks, Luca started sleeping through the night. 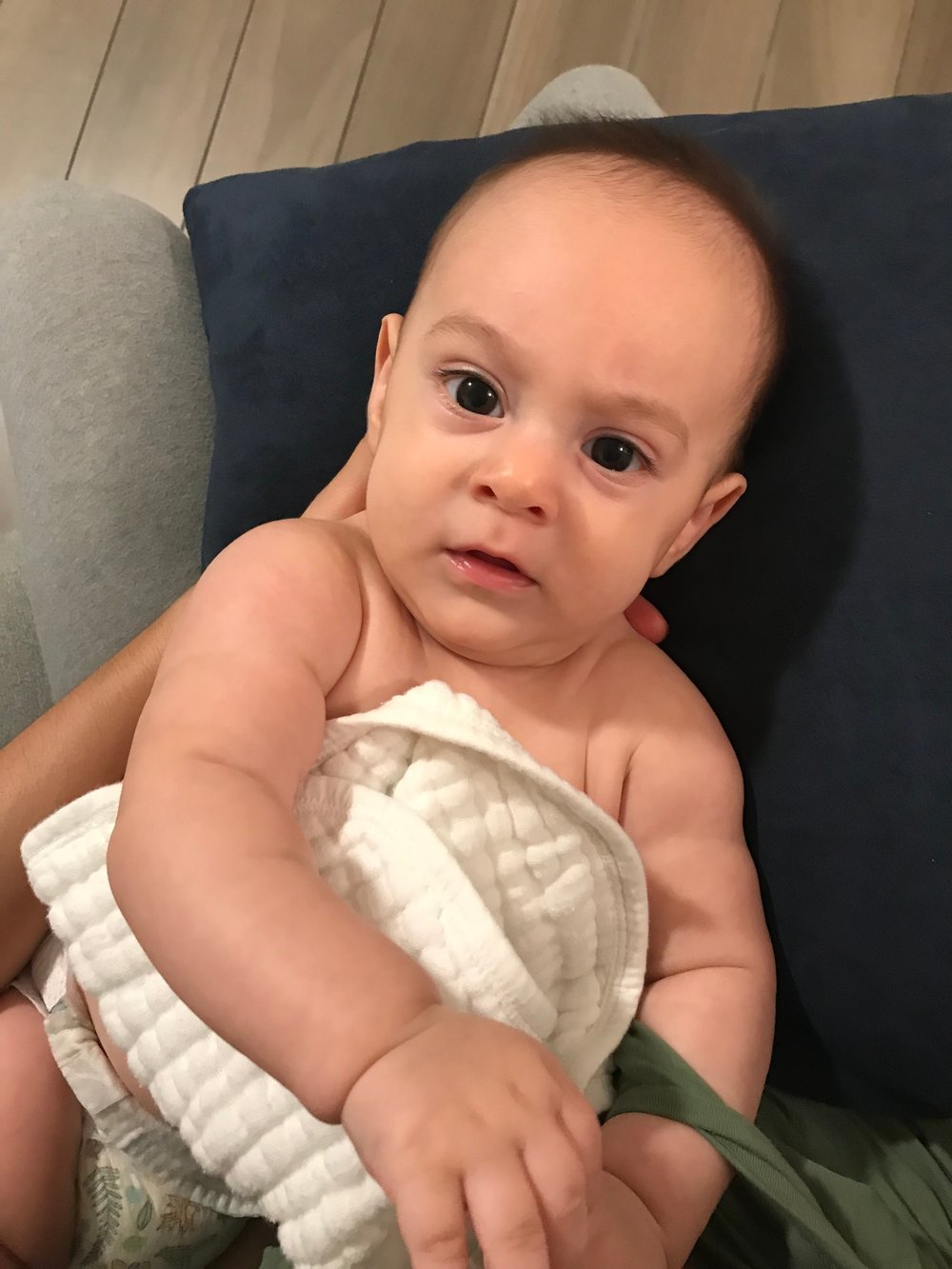 at first, he was sleeping 5 hours, then 8 hours, then 10 hours, then all of a sudden, around 8 weeks, he slept from 7pm to 7am. we were FLOORED. we didn’t understand! we couldn’t believe it! we kept checking on him throughout the night! since 8 weeks, he hasn’t woken up once for a feeding!

I’ve only ever fed him on demand (I’ve never put him on a forced/strict schedule) and I think that he drinks enough during the day, that he doesn’t need to get up in the middle of the night, because he drank all the ounces he needed during the day. I breastfeed, so this is just a guess (since I can’t measure via bottle.)

we also didn’t use a pacifier until about 6 weeks (and now only use it for nap and bed time to help him relax), so he learned to self soothe other ways – by sucking on his hands, shifting to get comfortable, etc. so maybe that played a part? 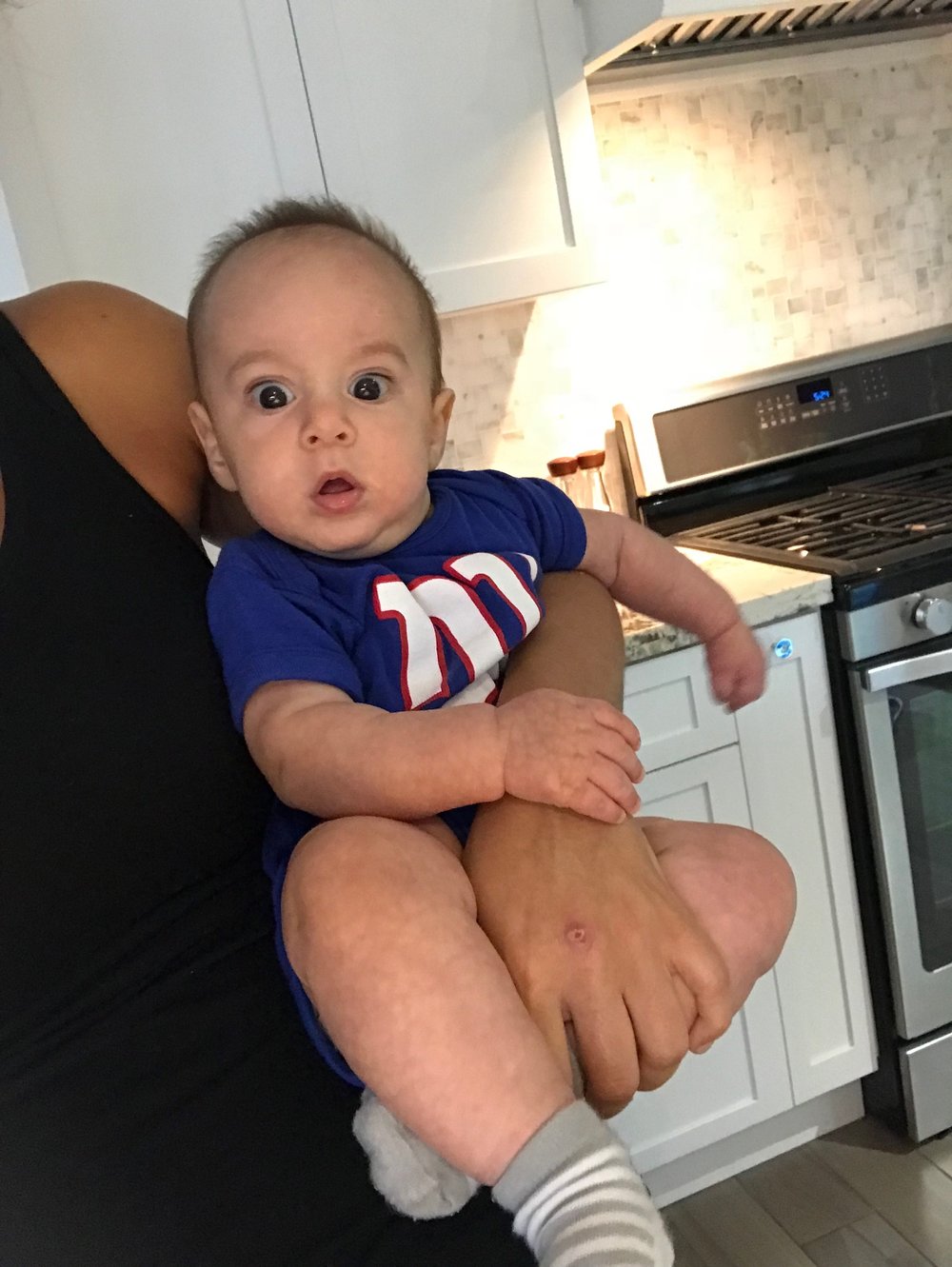 I wish I had advice for people on how to get their babies to sleep through the night (a question I get every day), but, unfortunately, I don’t. we are just so lucky – and realize that the next baby will be totally different. so, we’re soaking it up now, because we get uninterrupted sleep from bedtime to anywhere between 7am and 8:30am (it varies!)

I hope this helps with some of you new mamas! 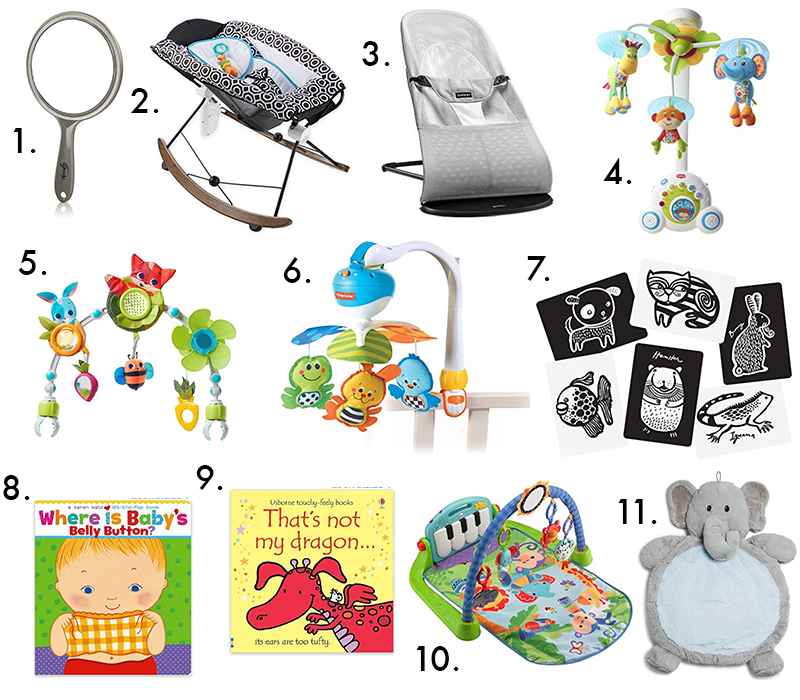 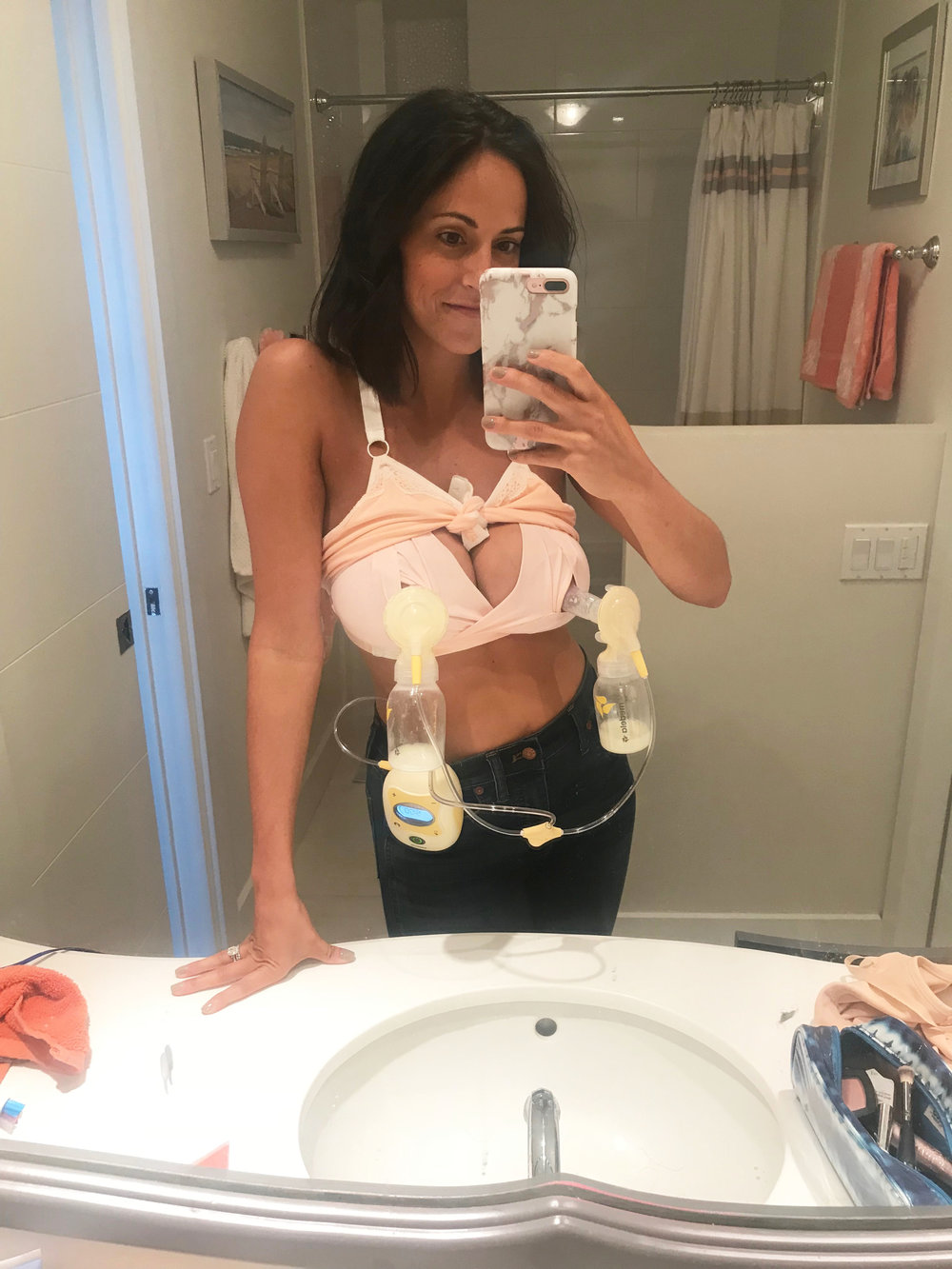